The Tree Cricket Oecanthus pellucens has been found in Jersey for the last two years.  It has been known in the Chausey Islands since 2001. The first Jersey records were in 2010 when I found two immature males near St Ouens Bay and later in the year the song was heard in the same area.  In 2011 several individuals of both sexes were discovered within a four hundred yards of the same spot.  The easiest way to find the cricket is to look in wild carrot flowers where they apparently sit and eat the  flowers and young fruit.

They are unmistakeable, light brown in colour, and the male is flattened with its wings laid flat on the top of the abdomen overlapping each other (see the first photo). The second photo is of a female.  Isolated indivduals have been recorded at two places in the UK, in Cambridgeshire and Kent, but they may well turn up as a breeding population somewhere soon as the species is extending its range on the continent.

Here is a link to an mp3 file of its song, courtesy of Baudewijn Odé 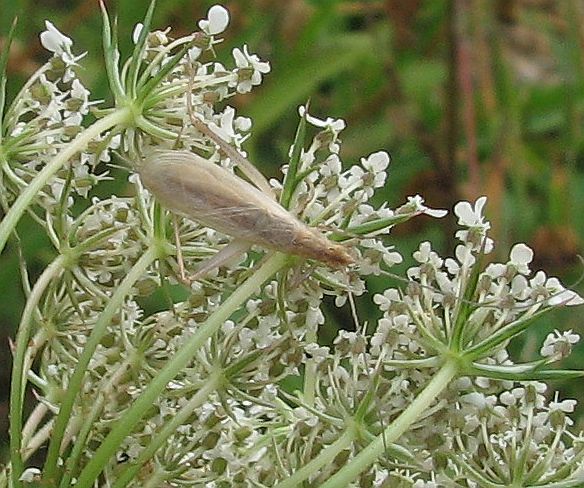